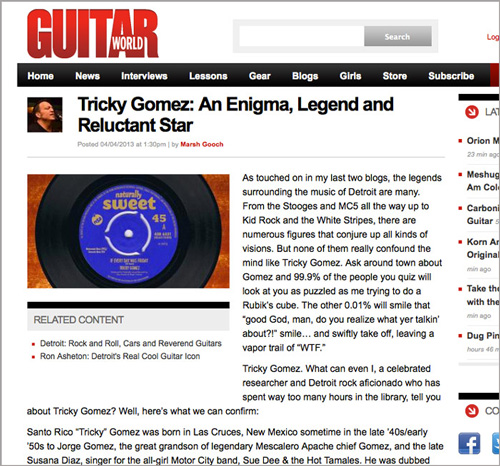 (one of five articles in the series written by me; links to other articles below)

As touched on in my last two blog posts, the legends surrounding the music of Detroit are many.

From the Stooges and MC5 all the way up to Kid Rock and the White Stripes, there are numerous figures that conjure up all kinds of visions.

But none of them really confound the mind like Tricky Gomez. Ask around town about Gomez and 99.9 percent of the people you quiz will look at you as puzzled as me trying to do a Rubik’s cube. The other 0.01 percent will smile that “good God, man, do you realize what yer talkin’ about?!” smile… and swiftly take off, leaving a vapor trail of “WTF.”

Tricky Gomez. What can even I, a celebrated researcher and Detroit rock aficionado who has spent way too many hours in the library, tell you about Tricky Gomez? Well, here’s what we can confirm:

Santo Rico “Tricky” Gomez was born in Las Cruces, New Mexico sometime in the late ’40s/early ’50s to Jorge Gomez, the great grandson of legendary Mescalero Apache chief Gomez, and the late Susana Diaz, singer for the all-girl Motor City band, Sue Dee & the Hot Tamales. He was dubbed Tricky as a child, by a neighbor boy who couldn’t quite manage saying Santo Rico, shortening it to “Trico” and finally, “Tricky.” Even his mother eventually called the boy Tricky. After his boyhood in Hamtramck (a borough within Detroit), details of Gomez’s life are beyond sketchy. In fact, you could say the tidbits we know of his life are like the little particles in an Etch-a-Sketch, always moving, morphing and being erased about as soon as the researcher thinks he’s onto something.

But we do know a bit more about his later life. For instance, that he was a guitar player with an uncanny ability to mix blues, rock, soul, funk, and whatever — into a genre-stretching style, that lets you know the guy has been around. As a young folksinger, it is safe to say, Gomez traveled the U.S. looking for, well, something. It’s rumored that he was scheduled to play Woodstock in ’69, but fate had other plans. His car died somewhere around Oklahoma City, and after two days of hitchhiking, he arrived 24 hours late for his slot—a day late and many dollars short.

We know that there are a few recordings that survive to this day, though even a scan of YouTube reveals next to nothing except the 1973 single “If Every Day Was Friday” which seems to disappear from the video channel about as quickly as it appears. That elusive 45 was released on Naturally Sweet Records, an indie label whose warehouse went up in flames in 1980, destroying all tapes, files and photos. He supposedly made an appearance on the Old Grey Whistle Test that year, but of course, the footage is long gone.

And we know this: Reverend Guitars’ head guitar tech, Zack Green, inauspiciously bought a house in Detroit sometime in the early 2000s which happened to be next door to where Tricky Gomez was then living with his mother. “He was really close to his mom,” Green explains. “He rarely leaves the house. Especially since she died. I can’t even remember the last time I saw him.” Yet, if it weren’t for Green, who introduced Gomez to Reverend guitars nearly a decade ago, we’d have even less to go on.

“I’d heard the guitar playing coming from the house, usually in the summer when the windows were open, and knew that whoever the guy was, he was a motherfucker of a player,” Green says. “I brought over a Reverend I had at the house — I think it was an Avenger — to show him, and he grabbed it and made it sound like nothing I’ve ever heard. Eventually I got him to come down to the Reverend facility. Well, it wasn’t just him. It was Tricky, his mom, a guy I could only describe as a spiritual adviser, and another mean looking guy with a large knife on his belt and a wicked mullet. Anyway, Tricky picked up numerous guitars, played them, and talked about what he’d want on a guitar of his own. We were very impressed with his playing and his, you know, mysterious aura. We figured this guy might hit it big one day, so we decided to make him something.”

Reverend’s Tricky Gomez guitar, though not technically a signature model, is based on the one-off that Reverend founder Joe Naylor built him. “Tricky wanted the Manta Ray body, but insisted on a headstock with six-on-a-side tuners. Said that was better for knocking his dog off the couch without causing serious injury to the animal, or going out of tune,” Joe explains. “He also said he preferred a satin finish because the gloss finish reminded him of ‘The Man’, whatever that means.” From the cat’s eye f-hole, to the old school Revtron pickups and Bigsby tremolo, the double cutaway semi-hollow body guitar is as resonant as its namesake’s legend.

So where’s Tricky Gomez today? “He moved away from the house after his mom died,” says Green, “and I have no idea where he went or where he ended up. I guess it was lucky that I had the balls to go next door to hear him when I did.”

Marsh Gooch is a graphic designer and writer from Seattle who has been playing guitar and bass “for an awfully long time.” Currently the bassist in King County Queens, he’s held marketing positions with ESP Guitars, Ampeg, Line 6 and Reverend Guitars. He rocks to all kinds of music, especially classic and punk rock, and actually prefers The Damned over the Beatles. At least half the time. He can be reached via his web site, marshgooch.com.

Other articles in this series written by Marsh Gooch:

Reverend Guitars and Heavy Rock: Past, Present and Future
https://www.guitarworld.com/gear/reverend-guitars-and-heavy-rock-past-present-and-future